Up until the pandemic, I wrote mostly for stage, and mostly plays for young audiences. I write for TV,  general audience theatre and political spoken word poetry, too. If you’re particularly interested in spoken word work, I’d pop over to the performance page here. 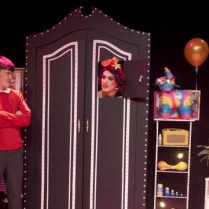 I’ve written several previously staged plays, one which has won a number of awards, and I have a plethora of projects in the pipeline for the next few years, including an ambitious trilingual play to be premiered in New Zealand. I’ve also recently written the script for the BBC Family Prom 2021 at the Royal Albert Hall. So a real mixed bag.

I’m Sian Ní Mhuirí and I’m an freelance writer.  I live mostly in Ireland, travel every so often to New Zealand (my other family home) and detour to many other places in between.