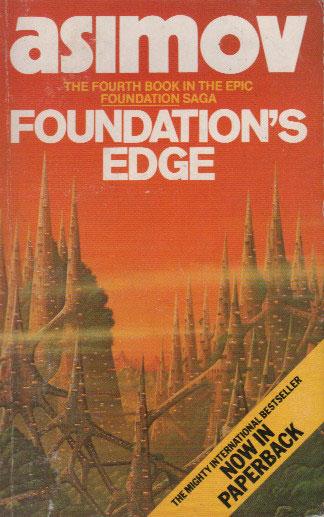 In a previous blog, I levelled a few charges against old school sci-fi. Namely, that it can be humorless, long-winded, dry as a rice cracker,  krhynjee (that’s ‘cringey’ spelt in the language of the Beefliklijek sector), varying degrees of sexist and racist. I believe I said it ‘does not date well‘ – I was feeling benevolent, that day.

Unfortunately, the Foundation series has all of the above flaws, to some degree. For those who are faint of heart… cringe, and depart…

It’s not funny. Not even once, and not even by accident. A statistical improbability, yet so it is. It is dry, a touch long winded – not as much as I imagined, though. Neither does it have too many moments of racism (it does have a ‘noble savage’ dynamic going on). As with many books by Great Whites, however, it didn’t even give itself the chance. The amount of racism in a book usually depends on the amount of people of colour described by the white author a.k.a. there were none, so there were none.

The book is at its worst when describing women. Many passages promise to be an uncomfortable read for anyone who isn’t an actual toddler, Norman Mailer, or perhaps a sex offender. At one point, our protagonist Trevize  – a politician who has been illegally exiled from his home planet indefinitely, without losing his cool – flips his lid because he is greeted by a female character at a space station (‘They sent a girl!‘ he exclaims, more than once. The girl is hot, twenty-three-ish, and wearing transparent clothes. Her name is Bliss).

There is no point describing Asimov describing women further, really. If you are surprised to hear that some famous authors dislike women, or perhaps simply do not know a way to write female characters without seeming to dislike women, I don’t know what you’re doing suddenly reading books, having apparently never read one before in your life.

HOWEVER. AND AT THE END OF THE GALACTIC STANDARD DAY….

I love a bit o’ Foundation.

I love it because and I like things that perform conceptual gymnastics. I like the strange dressage of possibility presented in sci-fi, so much that I don’t mind it being a touch preposterous. Sometimes ludicrous.  There were moments of Foundation’s Edge where I wondered if the intriguing political and social question posed at the start of the series had lost the plot and devolved into silliness.  Then I realised I didn’t care.

That intriguing political and social question, if you’re interested, seems to me to be – what constitutes the divine right to govern a whole Galaxy (a.k.a. IS THE FOUNDATION REALLY JUST AN ORANGE LODGE?).  The Foundation Series is a story that follows the agents of a ‘paternalistic’ autocracy of sorts, and I suppose the series explores whether autocracy can be kind and benevolent, at all.  If not, it makes one wonder whether the concentration of power in the hands of a few is avoidable, and if it isn’t, whether a more paternalistic autocracy, relatively to others, has it’s place.  Foundation also asks us to think about just how predictable human behaviour is en masse.  (Google the term Youth Bulge – citizen’s revolts, at least, can be seen as a type of set dance, repeating.)  If the powers-that-be could predict our behaviour, even our ignorant, crappy, Brexit-type behaviour, would we be better or worse off if they just left us to it? What about if they decided we needed guidance – what if that guidance lasted for millennia, in order to deliver us from evil?

Like I said, sometimes I found Foundation’s Edge straying from the above content, from what I find to be it’s central intrigue.  Still, I don’t care as much as I should, because what’s left is space travel and espionage and ‘mentalics’ and a villain called ‘The Mule’ and loads of secret societies. I will be reading the next book regardless.

High points were the depiction of Mayor Branno, seemingly the first competent, respected female in the Galaxy since Bayta Daryll (Foundation and Empire), and the many presentations of the myths surrounding the mythical home-planet of ‘Earth’.  Also, the Sayshellian food sounded delicious, and I want some.

Good quote – And as he and the computer held hands, their thinking merged and it no longer mattered whether his eyes were open or closed. Opening them did not improve his vision nor did closing them dim it.

Read if – You are interested in myth-making in a far distant future.

Avoid if – You are offended by lazy stereotypes. Or lazy prose.

Strangest sexist extract – (Bliss – the woman in the see-through dress, has just arrived.  She has been asked if she is human by Pelorat, who must be in his fifties, and replies ‘Do I look human?’)

Pelorat nodded and said with a small smile ‘I can’t deny it. Quite human. Delightfully human.’

The young woman spread her arms as though inviting closer examination. ‘I should hope so. Men have died for this body.’

‘I would rather live for it,’ said Pelorat, finding a vein of gallantry that faintly surprised him.

‘Good choice,’ said the woman solemnly. ‘Once this body is attained, all sighs become sighs of ecstacy.’

(Then, only a few pages later, after the description ‘just a girl’ has been used at least four times to describe Bliss… Trevize makes a dig at her figure…)

‘Men have died for this body. Huh – she’s bottom-heavy!’

I’m Sian Ní Mhuirí and I’m an freelance writer.  I travel and work between Ireland and New Zealand (my family homes) and many other places in between.

When I’m not writing, I’m taking pictures of my elastic face with exquisite backdrops. A digital project called Ugly Faces, Beautiful Places and it will be, I hope, my Magnum Opus.