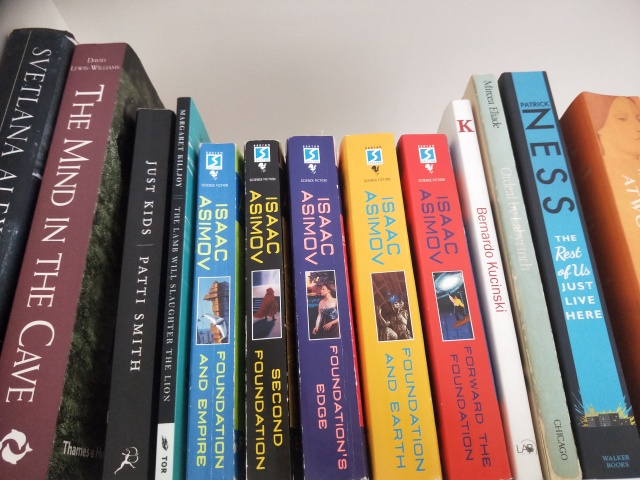 I’m not a huge science fiction nut. But after I discovered a second hand bookshop near to my dentist that has a bewildering amount of old pulp novels, I started picking up a few. It’s obvious that the books I’m picking up come into the shop from one specific donor because, even for sci-fi novels, the selection is very specific. A lot of forties, fifties and sixties sci-fi, a lot of Pan Publishing books, and a lot of Asimov and Clarke.

Just to put my own lack-of expertise on the table, these are the books I’ve read within the two-to-three years that I’ve been taking good care of my teeth…

So I’m about to write about the last book on the list, but it seems I have a quick thing I wanted to say about the above books first, a word of warning and of encouragement for the Asimovice (a pun that I will most likely delete later).

First off, science fiction can be a hard sell for many, because it gives a very uncharismatic first impression. Just like the ignoble Ewok, it can seem fundamentally childish, and relatively irrelevant. Then again, irrelevant isn’t so bad, you might think – loads of media we consume is flim-flamish, meaningless guff that, nevertheless, entertains. Who cares about relevance if we’re having fun?

But then you remember that sci-fi classics are steadfastly humourless, and so fun isn’t always possible. Asimov and Clarke (though not our lovely friend Verne) are dry, my children, as dry, dry, dry as a sex-talk from a Christian Brother. Furthermore, they’re guaranteed to make a modern reader uncomfortable at some point (to say that they don’t always ‘date well’, politically, is a kindness). They can be scientifically confusing at times, perhaps to fudge the laws of physics in service of new frontiers of plausibility.

Or maybe some of us simply cringe at the idea of reading a book about imaginary politics on the wooded but sulphurous moon of Xilyion, whose protagonist is (in descending order of importance) a space-pilot, a bore at dinner parties, and blue.

The thing is, though, that sci-fi, however dated, remains one of the most compelling genres I can think of through which to explore human crisis, on a collective, sometimes global level. It is a philosophic genre, and it has made me think deeply about huge and pertinent problems that are sometimes timeless, sometimes current, and occasionally even a step ahead of genuine scientific thought (check out how HG Wells jumped the gun on time travel). Sci-fi exposes scientific progress to catalytic exchanges with the best and worst of human tendency, and as a result it can occasionally strike philosophical truths that turn out to be sociologically accurate. The best example right now is how the TV series Black Mirror has awkwardly mirrored real-life political developments in the UK and China.

As much as I cannot get the literary treatment of ”negro” characters out of my head from Childhoods End (perhaps I stopped reading it for that reason, I can’t remember) I also cannot get the questions these books pose from my head, either. I’ve read thousands of books in my life, but I remember reading Ender’s Game when I was fifteen with real clarity. I remember (not quite sci-fi, and in no way dry) The MaddAddam Trilogy by Atwood as one of the best reader experiences of my adult years. Oryx & Crake is another book, by the way, that accurately predicts several things, including a US/Mexican wall.

So, even if you’re afraid of Josh dunking your head in a toilet for being a nerd, try sci-fi if you want to see the newest global dilemmas rub up against old ones, or explore how humans enact utopia and dystopia out of the same raw materials of scientific discover.

It’s the ancient interplay of the sacred and profane made new.

Can’t wait for my next filling.

I’m Sian Ní Mhuirí and I’m an freelance writer.  I live mostly in Ireland, travel every so often to New Zealand (my other family home) and detour to many other places in between.