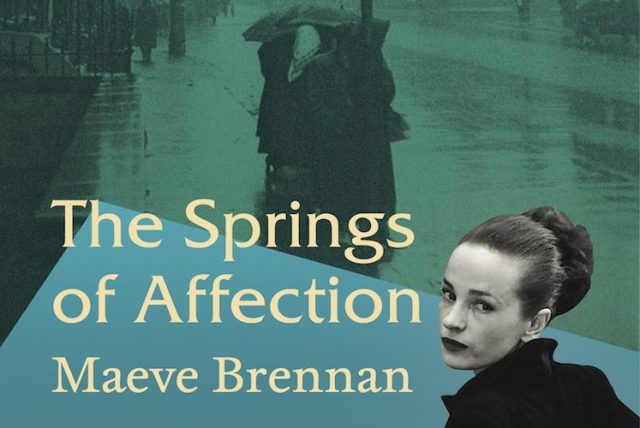 The Springs of Affection came to me through the amazing Ciara Fitzpatrick, one of the few true readers of my hyper-active general acquaintance. My main man Borges said he was ‘more proud of the books I have read than those I have written‘ and I’d admit to being more impressed by a great reader than a great writer (the former being rarer and more valuable). So Ciara’s recommendations have some weight. On the book’s inside jacket, she wrote ‘As you depart on your Antipodean adventures – may Maeve bring you back home when you need it.‘ As it turned out, all I brought to New Zealand was a backpack and set of bicycle paniers. I didn’t have room for Maeve, so promised to read her on my return, which I duly did. And what a wonder she is. And even in Dublin, she brought me home, or showed me home, or something.

We could all go blue in the face wondering how writers rise, or fail to rise, and why. All sorts of things can knock the air out of the soufflé of a writer’s legacy, being a woman at most times in recent history meant you were left totally out of the oven. Maeve, however, was a known literary figure in New York, a columnist, her collections favourably reviewed. Still, it all just doesn’t sit right. Dublin, after all, names and celebrates it’s chroniclers. Dublin knows about her Martello Towers and her borstal boys and just how Irish Beckett considered himself, all left and gone in Paris. We know. We like to know. We should know more about Maeve. We have been missing something all this time.

Despite the fact that Maeve wrote from New York, the world of her work is Irish in a way that is breathtaking and not-at-all breathtaking, that is totally un-diaspora in it’s reflections of home. It is crisp – it surprises me how much of the Dublin described in her book, I have never seen, having disappeared before my birth, and still how it seems close. The tram system referenced in the book is one that closed in 1949. When I returned from New Zealand this summer, I came back to an O’Connell street with a new tram system, the first time in fifty-eight years my commute might intersect with Mrs Derdons. But it seems we are closer in age than that.

This is a voice of a writer you wish was still living, not because she left a legacy of work unfinished, but because you’d want to know how a woman who could write like this shot the shit over a cocktail.

Read if – You like your wit dry, your protagonists slightly pathetic, and your old-timey Irish literature unnostalgic, and if you want less misery and abuse than the usual Irish serving.

Avoid if – the idea of a house bound woman’s life or a child’s perspective is of no existential interest to you (which begs the question, what are you doing on this blog?)

I’m Sian Ní Mhuirí and I’m an freelance writer.  I travel and work between Ireland and New Zealand (my family homes) and many other places in between.

When I’m not writing, I’m taking pictures of my elastic face with exquisite backdrops. A digital project called Ugly Faces, Beautiful Places and it will be, I hope, my Magnum Opus.